It’s an organic Turmeric soup that can be had for breakfast, lunch or dinner alongside some white rice. This turmeric broth is a perfect dish to start cooking with turmeric more often. It doesn’t get old, and it’s a super easy soup to make.

Probably best for lunch or dinner (although whenever we cook this I end up eating it for breakfast the next morning), this turmeric chicken soup can be made with your choice of meat, poultry or seafood. However, organic chicken on bone works fantastic and it’s how we make this recipe nine times out of ten.

This traditional Thai recipe is named “Gai Tom Khmin” or “Chicken Soup With Turmeric.” In Thai language, khmin means Turmeric (most likely, it translates to Curcumin). And in case you’d like to know, here’s the Thai spelling of it: ไก่ต้มขมิ้น

So if you happen to go out for dinner to a Thai restaurant, now you can show the waitress this: “ไก่ต้มขมิ้น”

And if she comes from Thailand, she’ll know exactly what you’re requesting.

Even if it’s not on the menu, a true Thai restaurant that has any soup on the menu should be able to put this one together for you.

The Turmeric Chicken Soup recipe has all the essential fresh herbs many Thai recipes often contain:

The photos for this recipe are not the best because I just snapped some quick shots unexpectedly last night when Ling made this for dinner. She asked me to dig up the roots while she grabbed the herbs and by the time we were done cooking, it was nighttime and so the lighting is not natural.

I’ll have to update this main picture with a daytime shot next time we make it because the incandescent lighting doesn’t do it justice.

Not only are you making a gut health promoting organic chicken bone broth, but the soup also has one of the healthiest herbs out there… fresh turmeric root. It’s known as a natural anti inflammatory herb, but it has more health properties than that as well.

This Turmeric soup recipe calls for the root, not a powder.

If all you have is powder, you can use that instead. It’s just not the same and would change the flavor if you used too much.

If you use the root, you can chew into it and ingest it because the broth cooking time makes the pieces of fresh turmeric soft and tasty.

Here’s a quick video sharing some wonderful health properties of turmeric… then we’ll get on with the Turmeric soup recipe!

If this video doesn’t make you want to eat turmeric every single day, then I don’t know what to tell you. Here are some more turmeric curcumin benefits.

Chances are you already know about the greatness of turmeric root or even turmeric powder in any form. If not via food, turmeric capsules are also great. It’s one of the few nutritional supplements I’ll take.

Now let’s get onto the recipe!

Step 1 of the Turmeric Chicken soup recipe calls for digging the roots and gathering your ingredients.

Choco posing next to Galangal root

I believe these are called green onion, not Spring onion.

Red or green both work

In a pot with boiling water, start boiling the whole chicken with salt.

The chicken needs to be on the bone. It’s best to use a whole organic chicken, and then you can cut into blocks, and give it a wack with a heavy handle or granite pestle to break the bones before placing it in the boiling pot and adding salt.

This is a key to making a fast and easy Turmeric Chicken Soup.

This draws out the bone marrow, gelatin and other goodness from the chicken faster, and the end result is something similar to a slow cooked bone broth even though you only boil for 50 to 60 minutes total.

Step 3. Place Herbs In With The Chicken

Soon after you’ve placed the raw chicken in the pot with the salt, put in all the herbs too.

Then, keep boiling all together with the roots, herbs and chicken until it becomes a bone broth.

Step 4. The Final Additions Before Serving

Once it’s ready, squeeze a lime into your serving bowl, drop in a Thai chili pepper and a teaspoon of oyster sauce, then serve your Turmeric Chicken Soup broth into this bowl.

This combines into what becomes a mouth pleasing turmeric soup dinner. It makes your taste buds happy, your liver happy, your gut happy, your brain happy and basically it’s a soul pleasing rejuvenating dish!

You can serve it with a side of white rice for a more filling meal. This is the traditional way to eat the Turmeric Chicken soup.

And that’s all there is to it!

The pictures I took for this one don’t do it justice.

Cooking with turmeric, especially with fresh turmeric root, Ling and I do as often as possible. This turmeric bone broth has become a mainstay in our home because of its great taste and good nutrition. It doesn’t get any better than this. It has fresh turmeric root, and organic galangal root on top of that… it’s basically a superfood (even though “superfood” is purely a marketing term).

This Turmeric Chicken Soup is a “superdinner” (my new word) and we really hope you enjoy it!

This Chicken Turmeric Soup recipe is very easy to make, as long as you have all the ingredients. It only takes around 35 minutes with prep.

The best part is, you can clean up during the boiling so by the time it’s done, everything is clean except the bowls you’ll eat out of and the pot you cooked it in.

We hope you enjoy this Turmeric Chicken Soup recipe, and if you happen to cook this yourself, we’d love to know how it went! You can send us a picture or add it in the comments, or tag us on Instagram and let us know how it went! Let us know if you have any questions! Contact us anytime or leave a comment below the blog post!  We hope you enjoyed this Turmeric Chicken Soup recipe!

UP NEXT: Sprouting Fam Roselle Juice Recipe – Another wonderfully healthy and delicious recipe made from herbs you can grow at home.

Related Reads from around the web: 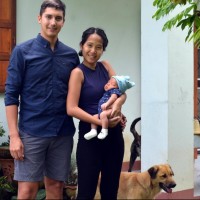 My name is John and I run this blog with my wife Ling. We're a small family, appreciative for our little lot in life and have this blog to share a bit about topics we care about. Nothing is more fulfilling than going through life in utter awe and amazement at the complexity and level of engineering in everything He’s created. And it's something I'm in awe of daily..

Roselle Juice Recipe Made From Fresh Flowers (Hibiscus Tea)
Next Post: How To Store Water For Emergencies (Long-Term Storage Tips)

Sproutingfam.com is a participant in the Amazon Services LLC Associates Program, an affiliate advertising program designed to provide a means for sites to earn advertising fees by advertising and linking to Amazon.com.

Receive our monthly email with interesting stuff and blog updates.

Thank you for subscribing.

The form collects name and email so that we can add you to our newsletter list for project updates. Checkout our privacy policy for the full story on how we protect and manage your submitted data!