A fixture in the Top 2 Best Thai Recipes ever list.

This easy Khao Soi recipe will give you a taste of possibly the very best Thai dish there is. This Khao Soi recipe uses pork, but chicken khao soi is the norm for most. Beef would be number the second most popular form of khao soi. Pork is not common, but we had it and so used it for this khao soi recipe. Chicken or beef are best for this recipe.

You can easily make a low-carb version of khao soi or make it “keto” too. The pork belly and lack of noodles makes this recipe is a low carb high-fat version of the traditional khao soi. Leaving out the egg-noodles altogether is one way. Another way is to swap out the egg/wheat noodles and make it a “Sen Lek Soi Gai” also known as ‘thin rice noodles curry with chicken.

Just like the Hinlay Curry, Khao Soi was introduced to Thai cuisine via northern Thai/Burmese mountain trade routes during the mid-19th century. As the story goes, Chinese and Muslim traders would use these ancient jungle routes to carry exotic spices, opium and many flavorful cooking traditions between India and China. It’s the Yunannese which are said to have introduced this glorious coconut curry soup to Thailand, along these routes, to feed traders en route. But I’ve seen people mention Burmese Thai food. So I’m not sure if it’s more from the Burmese or from the Yunannese (Kunming is a great city by the way).

You can make Khao Soi from scratch, but it’s not easy.

Traditional Khao Soi Ingredients (difficult): These are just some of the long list of ingredients used when cooking kao soi from scratch.

In contrast, here are our recipe ingredients:

I was always of this mindset that khao soi was impossible to make because of all the ingredients. The most important thing is that you need to end up with a rich and creamy multi-colored deep orange/yellow broth. And you need to slow cook the meat inside it in order to achieve that. It won’t be the same with pre-cooked meat and just the spices, paste and herbs.

Using our recipe here, you can replicate a from-scratch traditional Khao Soi flavor. The resulting taste is right up there with an authentic one made from scratch (as long as you get a high-quality paste like this Mae Pranom brand one).

Instead of using the long list of ingredients that an authentic khao soi recipe calls for, this easy to make khao soi uses a curry powder, red Thai chili paste, and coconut milk. The spices used in red Thai chili paste, combined with curry powder, replicate what you can do with all those ingredients from scratch. It really is just as good if you cook it right (just follow along and you will…).

This is what the final result looks like with the pork belly, and no noodles, because it’s a low carb recipe.

If you’re looking for a low carb meal, you can still eat khao soi without the noodles. It takes away a lot, and it wouldn’t officially be considered a khao soi, but it’s still good. You can also use shirataki noodles, or thin rice noodles which in Thai are called “Sen lek.” This makes it a “Lek soi gai.”

At least 50 minutes before serving.

First, cut the pork belly into cubes. If you’re using chicken or beef, you can instead prepare those at this step.

Next, chop the coriander (we also used green onion in this recipe, but that’s not in a kao soi usually).

Step 2. Make Curry Broth With Meat Of Choice In Saucepan

At least 40 minutes before serving.

Next, over medium heat in a wok or saucepan, heat the coconut oil.

Then, place the red Thai curry paste in the heating oil.

Mix these together in the saute pan a bit..

Then add your meat of choice.

(pork belly for this recipe, but chicken is probably the best choice)

Next, sprinkle in the curry powder soon after adding the meat.

This creates a vibrant mix of red and orange color from all the spices.

Cook for a couple minutes,

Then add the fish sauce.

Immediately after adding the sauce,

Bring to a simmer,

Then stir occasionally over low to medium heat for the next 20 minutes.

This is the entire recipe.

After a minute or so it will be ready.

If you’re going for a low carb, “keto” khao soi, then you can skip the egg noodles.

To make the crispy egg noodles, over medium heat place the coconut oil in your pan and cook them until they’re crispy. You can discard the oil and sprinkle crispy yellow noodles on top of the Khao Soi.

Kao Soi Gai is always served with a side plate consisting of a little mound of fermented vegetables or sour pickled salad, chopped shallots and a couple lime wedges.

Sometimes it is served with roasted red chilis.

Putting It All Together

Sprinkle the deep fried yellow egg noodles on top and serve with its side plate.

I included the egg noodles here so you can see, but left them off because I ate it without them.

A freshly squeezed lime wedge is needed. Without the touch of lime, it’s still great, but not the best it can be.

Shallots and pickled cabbage are something I used to use sparingly, but now enjoy dumping the whole side plate in with the rest. And that’s it.

It looks better when all the garnishes are inside.

This is it garnish and without the usual yellow egg noodles (which have some wheat in them). With or without noodles, this khao soi is great. You can experiment with your favorite types of noodles, but usually it comes with egg or if you ask with skinny or big and flat rice noodles. 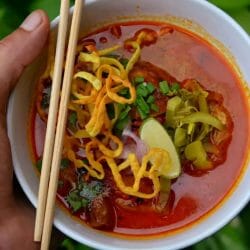 You can enjoy this recipe with rice noodles, shirataki noodles, or no noodles. When ordering in Thailand you’d ask for a “Sen Lek Soi Gai” or a “Khao Soi Gai Sen Lek” and they’ll make it with thin rice noodles instead of the egg curry noodles usually used.
Keyword khao soi recipe, thai coconut curry
Tried this recipe?Let us know how it was!

Thanks for coming by the blog and let us know what you think!