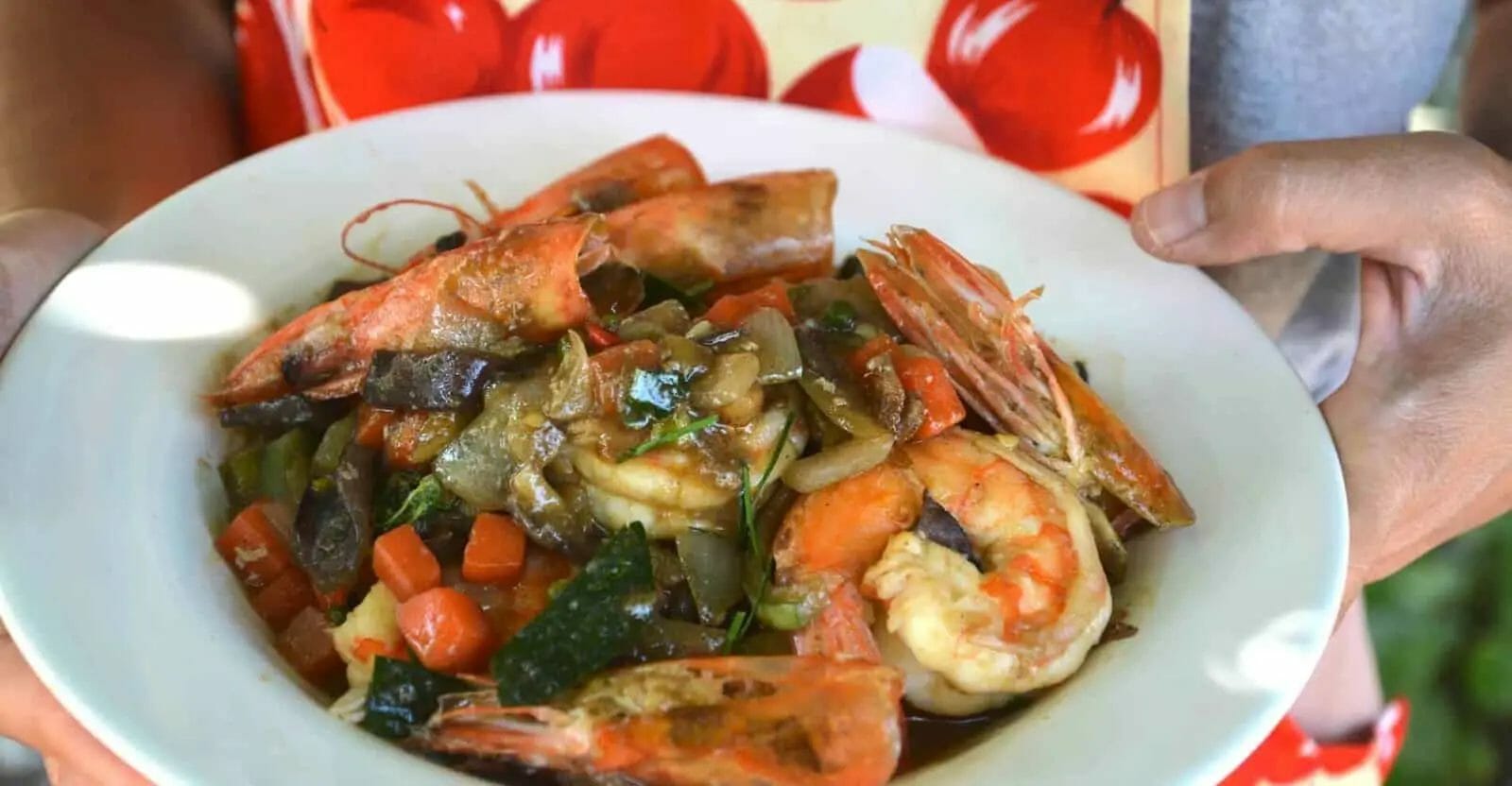 February 22, 2020 | Last Updated: November 29, 2020 | by John | Affiliate Links: ✔
Share with friends!
TwitterFacebookPinterestYummlyPocketTelegramShare
This Easy Thai Shrimp Recipe is one of the many we make. As tasty as it is healthy, it uses sweet basil, Thai chili peppers, garlic, kaffir lime, and fingerroot that help burn fat internally. The Thai name is "Gung Pad Cha."
Jump to Recipe Jump to Video Print Recipe

Looking for an easy Thai shrimp recipe? Here’s one to surely spice you up. It can also be called a Thai Basil Shrimp Recipe because of the herb’s flavor, but the chili peppers and garlic are just as highlighted in this one. So if you’re in search of Thai spicy shrimp recipes, this is one to have on your list.

Generally, if we cook with shrimp, we’d put the shrimp or prawns in last. But in this recipe, we chose to put the shrimp in first because we want the garlic to soak inside the shrimp throughout the whole cook time.

You can leave out the Thai chili peppers. The fresh peppercorn will still make it internally hot (and give it a slight kick) to retain its healthy fat burning benefits. Traditionally in Thailand, fresh peppercorn herb is known to help burn fat. And sure enough, recent studies confirm it.

It burns fat (not just your tongue). And it reduces gas and bloating thanks to the spicy herbs that create a healthy internal heat that is said to help burn fat. 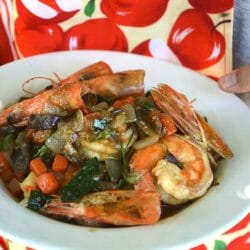 The optionals (extra veggies in the fridge) 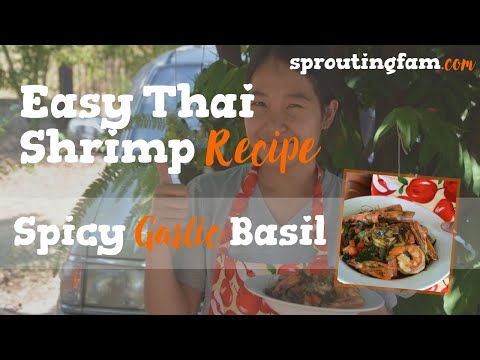 *To be served with a side of freshly made white rice.

We put added ingredients only for the nutritional value as we ate this for lunch that day. Usually, the optional ingredients from this recipe are not in the standard Thai version of it.

The actual bullet point step by step directions are written above, but here is another quick breakdown of the recipe directions. The first images show all of the ingredients we used, laid out so you can easily see the ingredients in this easy Thai shrimp recipe. Over medium heat in a cast iron frying pan, just cook the coconut oil for a minute before adding in the sliced garlic and chili peppers.

You’ll notice the wonderful, strong smell coming out and at this point you’ll add the raw shrimp or prawns. If you’re indoors, you’ll want to get the ventilation going because the fresh Thai chili peppers sliced then stir-fried will make everyone in the room cough up a storm. It’s no joke.

The carrots, mushrooms and small eggplants are only in this recipe because we had them in the fridge and needed to use them. But normally, this recipe would not have these. However, it’s such an easy Thai shrimp recipe that you can throw random vegetables you also have in the fridge and you may find they blend in perfectly like the carrots and mushroom do. Sugar is another optional ingredient that would pair well with the spice.

And the very last steps are the Thai Sweet Basil and Kaffir Lime Leaves. Add these in when the dish is finished. Stir them in for a second, turn off the flame, and then serve..

Ling topped off the dish with a bit of sliced Kaffir Lime garnish. If you do this, you can eat the Kaffir Lime raw no problem.

What’s the difference between shrimp and prawns?

Are they genuinely different species of sea creatures? Or are they just two different names for shrimp?

The two are genuinely different. Science-wise, prawns are in the Dendrobranchiata sub-order, and shrimp are in the “Pleocyemata sub-order, but they’re both “decapod crustaceans” with ten legs and an exoskeleton. They both swim around in salt and fresh waters, rummaging the ocean floors for food.

The easiest way to spot the difference is probably their legs. Prawn legs are longer than shrimp legs. And only on two pairs of those legs do shrimp have claws compared to prawn that has claws on three leg pairs.

If you ask the experienced chef, you’ll hear that prawns are more delicious, but for the most part, everyone thinks they taste the same. They can be used interchangeably in recipes like our easy Thai shrimp recipe here. Food & Wine has a good article that talks more about shrimp vs prawns.

It’s one of those recipes you can make on a whim using random things in the fridge you want to eat before they go bad.

Carrots, mushroom, onion, eggplant, all of these ingredients we added (except the onion, this one is important to add a sweetness that balances the spice of this dish). Many vegetables you can slice or chop and throw in the iron skillet cooking the shrimp and the tasteless coconut oil, chopped chili peppers, and fresh sliced garlic.

And there you have it. Ling gives up a few of her secrets here, and I hope I translated the making of this Thai shrimp recipe good enough from her explanations.

Thanks for visiting the Sprouting Fam blog!

NEXT RECIPE: Roselle Juice Recipe: a healthy liver-cleansing drink to help cool you down after eating this spicy shrimp!

DIY Aquaponics: Getting Started With Aquaponic Farming
Next Post: How To Dry Meat In The Sun – Moo Dad Deaw Recipe (หมูแดดเดียว)