The problem described, and then a hopeful outlook thanks to a growing number of glyphosate free oatmeal brands.

Do you enjoy eating cereal and oatmeal? Chances are yes, everyone likes cereal!

Sadly, the fun is over.

There is now something worse than sugar in all the cereals and oatmeals you ate growing up.

Glyphosate in cereal and oatmeal is harming us all.

I say “all” because it’s not just in cereal. From Lucky Charms to Cheerios, most all of the non-organic cereals tested contained glyphosate herbicide.

Did you know that each year, 250 million pounds of the toxic glyphosate weed killer from Monsanto are sprayed onto our American crops? And this is not exclusive to the U.S.

And not only us, but animals too. So that means it comes from meat too.

Whereas you can eventually wash and scrub off pesticides from fruits and vegetables, that’s impossible with wheat and meats from Roundup poisoned animals.

Glyphosate in cereal & oats has ruined a once-honest breakfast

Children have more weed killer in their bodies than adults.

Is it a coincidence it’s found more in kids and kid foods than in adult-foods? Why does it seem like there is an attack on our young ones?

In this article by the Environmental Working Group (EWG) , they share how major food makers like General Mills continue to make popular kid cereals among other popular foods despite the high amount of the carcinogenic glyphosate Roundup used to make them.

This image below shares 21 popular foods that use oats that were tested in a study commissioned by the EWG:

As you can see, Cheerios are the worst.

There should be no glyphosate in food. Especially not in popular children’s cereals.

In this other EWG article titled, “ 10 Food Companies Join EWG Glyphosate Petition ”, they share a harrowing fact about Roundup glyphosate:

Over the past 25 years, the EPA has increased the amounts of glyphosate residue allowed on oats 300-fold. The first increase, to 20 ppm, was granted in response to a 1997 petition from Monsanto, when farmers around the world first began using glyphosate widely as a late-season desiccant. It was increased to the current 30 ppm level in 2008.

So are there any glyphosate free oats at all? Are all glyphosate ridden? Thankfully, there are.

The EPA says it’s safe too.

New Report: 90% of families have it in their bodies <— INSANE!

Here’s a link to the PDF report of that Glyphosate In Children VS Parents Study.

Farmers who look at dollar signs before health use this toxic herbicide as a pre-harvest drying agent.

They use this cancer-causing herbicide to dry out plants, so they can harvest them and sell them off to be turned into food faster.

They make sure to soak our foods in glyphosate.

The majority of us are too busy to pay attention, so they go on dumping chemicals into our foods. Because it is a slow death and a slow punishment to our bodies (which are our temples), we seem to ignore it.

Ever wonder why 1 out of 2 people gets cancer now? Autoimmune diseases?

My guess is weedkiller is one factor of many similar unfortunate ones.

But yet it remains in popular store-bought foods and in most the foods in public school lunch menus. Look at the ingredients of the cereal boxes of today:

I’d like to look at the ingredients list of the same cereal box in the ’50s (if you can find one let me know).

My guess is that the Cheerios from the past are night and day different. The only thing the new labels are missing are the glyphosate-in-cereal-fact. It should be in the ingredients label, because it’s a main one.

Why aren’t today’s environmentalists concerned with many key dangers around us? They attack CO2 levels, but they never look at Monsanto/glyphosate or micro-plastics or metallic compounds and nanoparticles in the air we breathe, or look at the many holes in the climate change narratives which are obvious agendas (21 & 30). They never ask themselves, “should we be dumping fluoride in our water?” My opinion is that TRUE environmentalists are being usurped by these fake/naive ones that are used (unknowingly) to forward some evil agenda.. but that’s a different conversation. It’s truly an evil plan that’s unrolling before our eyes, but we’re too busy fighting each other instead of seeing this.

But what about “Organic” Cheerios? Why still give them your money?

Taking it a step further, if any of those glyphosate free cereal brands are owned by the same companies who dump roundup on wheat just before harvesting, why give them your money either?

The only companies deserving anything are those without ties to these toxic food producing companies.

If these 2 above provide oats and cereals without glyphosate, you’re funding their parent company products that do have the toxic weedkiller smothered wheat products.

Below I list a small number of trusted Roundup-free brands, and then provide links to longer lists of a pleasantly large list of truly certified organic brands with clean products.

These are what look like their 3 most popular selections of organic glyphosate free oatmeal; original, brown sugar with maple, and apple cinnamon:

They are a big company with 3 additional brands under their portfolio after Nature’s Path; Envirokidz, Love Crunch and Qi’a.

Back Roads Granola is a family bakery from Brattleboro, Vermont.

Here is how they break down their own company:

“Peter is master baker and in charge of operations. Virginia is in charge of sales, marketing & all things customer service. Daughter, Coral recently moved back to Vermont from Boston and is heading up the online marketing efforts. Our friend, Barb helps run our office. We answer your phone calls & emails and we hope to personally meet you when we are on the road doing demos and correspond with you through Social Media outlets.”

You think Kelloggs could fake even being this homegrown and family oriented, let alone small and trustworthy? No.

It’s refreshing to see their company ethics in line with what you want for food you feed yourself and your family. Integrity is a prime focus for Farm To Table. This is a quote from their website:

Farm to Table will not compromise its integrity. In a perfect world, people all over the country would be able to enjoy the bounty of our products. However, if expansion means neglecting our commitment toward the finest ingredients, or that we can’t afford to create products that meet big box store pricing strategies, so be it. We won’t be there. If necessary, we’ll remain a niche product for the select few who insist on top quality ingredients and a gourmet offering.

Here’s what you can expect from their glyphosate free oatmeal: 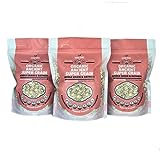 Their grains are whole and they put just as much emphasis on taste so you’re not getting spoonfuls of organic and glyphosate-free oats that taste like cardboard (although that would be 100% better than a tasty mouthful of roundup weedkiller oats).

These first 3 on the list of glyphosate free oatmeals brands are rated 5-stars on Cornucopia Institute’s List of trustworthy truly certified organic companies.

MUSH is certified by The Detox Project as 100% glyphosate residue-free.

And being southern California born and raised, I had to add them to this list because they are from San Diego, California. 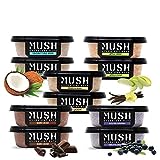 Here’s a quote from their “Ingredients” section of their site. I’m not sure why they don’t add “glyphosate-free” to this list since more people than they know are actually looking for this exact criteria. However, they do have that Detox Project certification so they’re not those fake “All Natural” or sneaky “USDA Organic” type.

The Detox Project is a research organization that provides glyphosate-free certifications to brands with foods that pass their tests. Just like the Cornucopia Institute list, they have a list of certified clean and healthy brands as well. Their certification means that the oatmeal brand is 100% glyphosate residue-free.

You can learn more about The Detox Project Glyphosate Residue-Free Certification in this writeup.

Monsanto dumps toxic weedkiller on wheat in order to help it dry out faster so they can capitlize on profits. The evil side of capitalism, yes there is one. Commie’s would likely do the same thing, so what’s the solution for the end user, us?

The solution is to stop supporting these faceless corporations who also buy out popular “USDA Organic” brands like Kashi (Kelloggs) and Annie’s (General Mills).

And to support the smaller, honest and transparent companies that care more about you than about maximizing profits at the cost of your and your family’s health.

Thanks to Cornucopia’s List and also organizations like The Detox Project, coupled with a rising awareness among men and women worldwide who have learned about glyphosate in cereal and oatmeals they’ve grown up eating and are feeding their children, trustworthy brands are no longer impossible to find for anyone. You don’t have to grow your own wheat to ensure you’re not getting poisoned thanks to this fact.

You’d think with all this unlawful mask-forcing going on, that governments actually cared about our health. Thankfully organizations like The Detox Project and The Cornucopia Institute actually do and we now have some transparency among food companies.

NEXT: As if glyphosate in food wasn’t enough… Toxic baby foods to banish from your home.