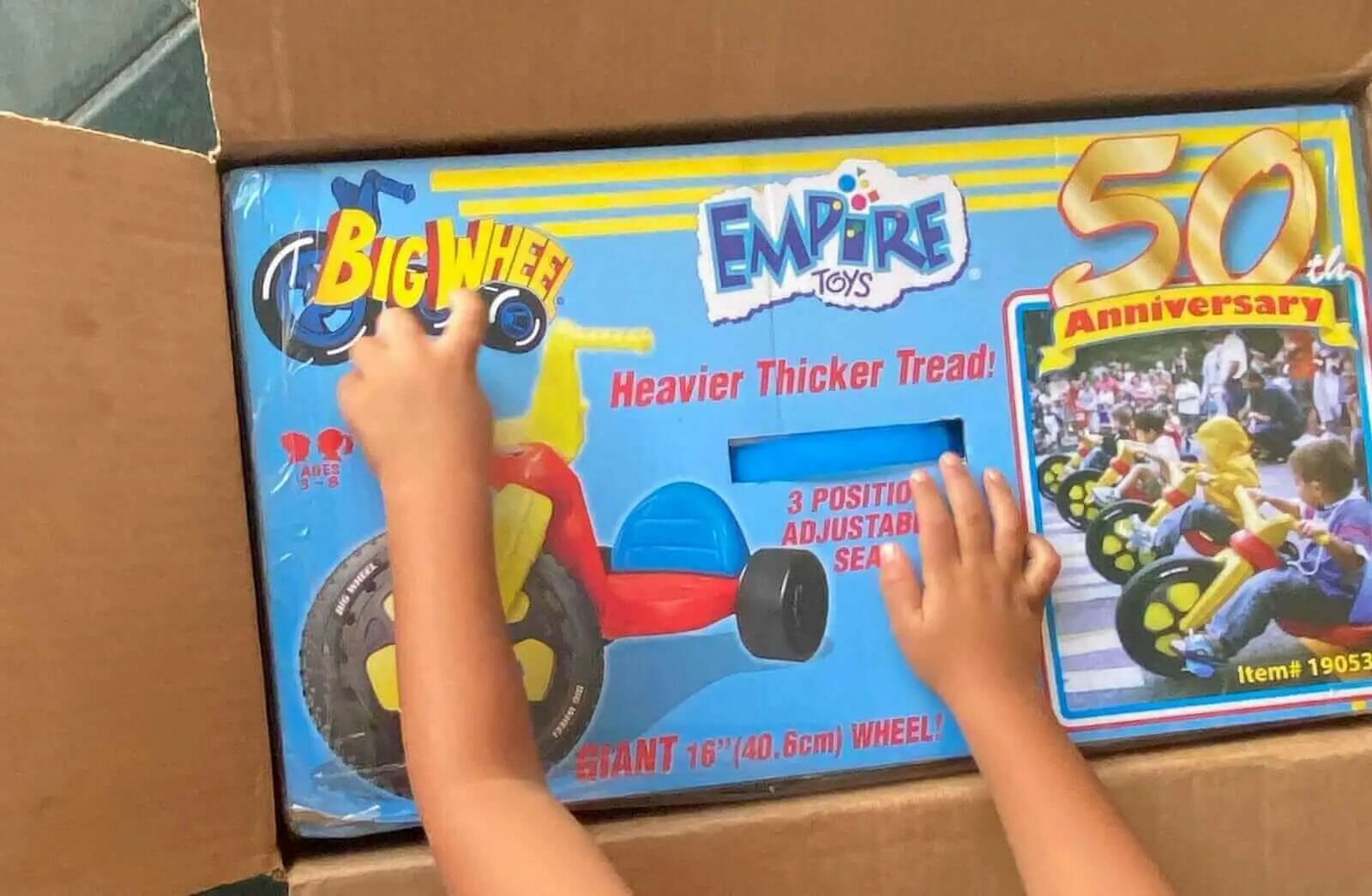 If you’re in search of the best toy for your 3-year old boy or girl, you cannot go wrong with an Original Big Wheel (the 16-Inch Tricycle or Trike).

Of the few memories I have from being a 3-year old, my Big Wheel is forever cemented as one of them. I don’t really remember any other toy I had at this age. I remember bombing it down my driveway and the joy it brought me doing that as if it were yesterday.

For this reason I had to get my 3-year old boy his own Big Wheel when the idea came to mind.

At first, before the thought of the Original Big Wheel trike for toddlers came to mind, I was looking at shops around town for children’s tricycles.

One of those that has the handle on the back, or one of those pedal-less ones that they can push with their feet like a Flintstones 2-wheeler (although these ones look great too).

I’m not a fan of tricycles because just like with 3 wheeler ATV’s, they’re prone to tip over.

As I browsed these common toddler trikes and bikes something held me back.

It all became clear when my Big Wheel memories came back to me.

I then knew we needed one of these over anything else. 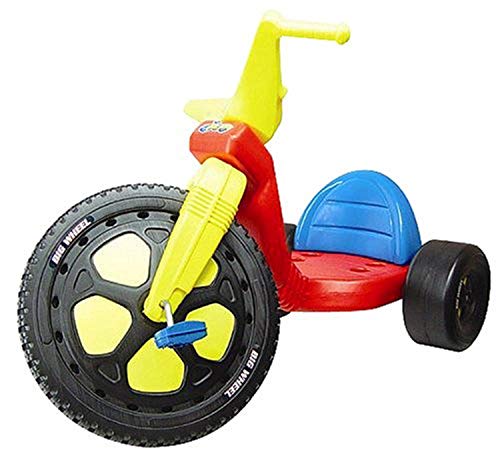 It’s a 3 wheeler, but it keeps the child’s center of gravity down low to the ground.

They’re pretty impossible to flip over.

Something proving true now watching my son ride down bumpy slopes at the nearby park that lead onto the pavement. It handles it great, without tipping over and crashing.

Any other raised-up 3-wheel trike would guaranteed-crash where this one will do the occasional wobble when they’re really bombing it somewhere they probably shouldn’t, but won’t crash on him.

The Big Wheel is perfect for a 3 year old.

And it will likely remain perfect until he’s ready for his first BMX bike.

I looked online and was stoked to see they still make and sell the same one I was riding on in the late 80’s. And since we’re down in Mexico at the moment, I was even more stoked to see that Amazon ships them here, too!

Big box stores in the U.S. might have them available locally, but if not, Amazon does have them.

There are online retailers outside of Amazon that also sell them. Here’s a great selection of Original Big Wheels.

If you look on Amazon, there are a number of knock-off Big Wheels branded with modern Disney/Pixar children decals. If the Disney decals weren’t bad enough, they also have LED lights over the wheels and if you read the reviews they’re bad quality and cheaply made.

Additionally, the price of the original Big Wheel is around the same as these regular tricycles I’d been seeing at retail stores in town. So for the same price, I opted for the Big Wheel. 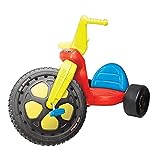 There is also a Radio Flyer Big Wheel that looks like good quality if the Empire Toys big front wheel bike isn’t available for some reason.

Below are a few pictures during the assembly that might be helpful.

Overall, it’s very easy to put together and should take you around 15 to 30 minutes including the decal placements.

We gave our son a duty to identify the parts on the assembly instructions, spreading them all out before building, and then handing me each piece as I needed it. We then all put the Big Wheel decals/stickers on there together.

Here is an image of the assembly instructions that come with it.

The hardest part was getting the back wheel axle caps on.

This is step 1 on the instructions pictured above.

You take a hammer or a stone and bang it down over a wooden block just hard enough to wedge it on tightly.

Then you slide the wheel, the Big Wheel body and the next back wheel before closing it all in with the second steel axle cap hammered on the other end.

After getting the first one on and seeing how it works, the second one was easier.

It doesn’t seem like it’s something that would stick on there.

But yes, our son rides this thing like crazy and these axle caps stay on strong once you hammer them on in place.

Another step worth mentioning from the Big Wheel assembly is the fork.

It’s got these 2 yellow block pieces that screw onto the back.

This is step 4 and 5 of the Big Wheel assembly instructions.

I knocked out the little plugs on the first one (left).

But kept them in on the second block.

When putting them on the back of the tip of the fork, I realized it’s better to keep them in.

It made screwing them on fit tighter and it felt stronger vs the ones that I knocked them out of.

End of the day it didn’t make much of a difference.

Both sides are still on and going strong.

The only other step worth mentioning is the pedals.

If you read the reviews, these have the possibility of being hammered on too strong and possibly breaking.

For this reason at first I hadn’t banged on there good enough and they scraped the ground on his hard left and right turns.

I ended up hammering them in really good to ensure they cleared the ground when turning all the way left or right. And while the cheaper knock off big wheel front bikes might have broken by doing this (saw that on a review of those), the Empire Toys pedals withstood the semi-strong hammering just fine.

Life without a smart phone has one major disadvantage. Quick picture and video snaps are no longer available.

I have to get my boy riding this thing on video and then post it here on this article.

My brother just gave me his old mirrorless camera that is small and is supposed takes pictures as good or better than my Nikon D7100 which I always keep shelved for casual outings like going to the park with the Big Wheel.

I’m just getting started with the mirrorless so I will start taking more pictures and hopefully get my boy riding it so I can upload it on here in the future.

Turns out they came out in 1968 and were iconic childhood tricycles of the 70’s.

I found this 70’s TV commercial on them. This one was made by “Marx”. Louis Marx and Company was the original maker of the Big Wheel.

This Louis Marx and Company one from the 1970’s looks even better with the compartment on the saddle and the hand break.

Now knowing that it’s still being made and is available in 2022 from Empire Toys, we ordered this one and our son is riding it daily, inside and out. It becomes the center of attention on some days at the park. It has even helped him learn about sharing by letting others go for a ride when they want to.

I just came across this and must share.. an adult big wheel!

Summary: The Best Toy For 3 Year Old Boy Or Girl

When it comes to the toy of all toys, one that gets him outside in the sun and the attraction of other children to play together at the park, the Original Toddler Big Wheel trike was a great choice. Enough to write this feedback on it.

We don’t do many toys, nor screens. Outside of his handful of animals, balls and hot wheels, which he is very appreciative of, he enjoys his books, pencils, paints, music and his drawing. The Big Wheel was the perfect addition to his stuff.

So if you’re in need of an epic Christmas or Birthday gift for a toddler, make sure you consider the Original Big Wheel!

RECOMMENDED: Learn about 5 Important Earthing Benefits to know about, especially if you spend a lot of time indoors or with rubber sole shoes on.

The goal is to get you fresh content each month. This will happen!!

Thank you for subscribing.

11 Herbs That Smell Good & How To Use Them Indoors
Next Post:Homemade Clove & Cinnamon Mouthwash Recipe